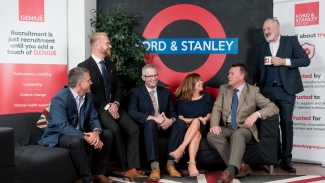 Ford & Stanley, the specialist recruitment company based on Pride Park, has been bought out by its senior management team.

Owner and entrepreneur Peter Schofield, who remains as overall Group Chairman, has sold the recruitment arm of the business to “allow it to grow with the next generation”.

Schofield will continue to drive that area of the business, while the recruitment side will now be run by senior managers Sam Ford, Daniel Taylor, Chris Jones and Eoin Grindley.

Schofield said: “The recruitment arm of the Group has grown so much in the past two years it now needs leadership dedicated solely to that side of the business and the MBO of Ford & Stanley Recruitment creates that, whilst allowing me to concentrate on GENIUS Performance, which is also growing at a pace.

He added: “We’d tried in the past bringing in managing directors, who naturally wanted to put their own stamp on things, but ultimately this put pressure on the very ethos upon which the company was built and upon which it flourishes.  We’d also had a lot of interest in buying the business from external parties, but it never really felt like the right thing to do.  Who better to protect the values of the business than those who already work in the business and live them day to day?

“The new owners understand the power of the Group offer and will bring energy and continued drive to Ford & Stanley Recruitment. They too have turned down many an offer to leave and work elsewhere over the years and I believe them now owning the recruitment business is a reward for them for staying with us and for the brilliant jobs they have done.”

Emerging as a force from the ashes of the global recession in 2008, Ford & Stanley Recruitment, set up by Pete and Kate Schofield on Pride Park in Derby, celebrates 10 years with 35 staff and a £13million turnover.

Specialising in rail but working across a spectrum of sectors such as digital technology and infrastructure, being based in Derby and, in particular on Pride Park, with the rail industry booming there are no shortages of employment opportunities.

From a three-man office above a hairdressing academy on Pride Park, the company has expanded to take over the whole of that building and the adjoining building next door, which is home to the operational business and the company’s own training academy.  The company also has offices in Birmingham and London.

And having had its roots in a long-established performance consultancy, it enabled Ford & Stanley Recruitment to take a recruitment proposition to UK employers that is recognised as genuinely differentiated from what is generally regarded as a crowded market.

Director Daniel Taylor said: “Employers and candidates recognised right away we were bringing a different approach to recruitment and one that brought them the results they wanted.  It’s been an incredible experience so far and genuinely rewarding that the Ford & Stanley team and our customers buy-in to what we set out to do.  Speaking on behalf of the new owners, we are totally committed to continuing the growth trajectory whilst protecting the legacy Pete and Kate, leave behind.”

Schofield has been at the cusp of where people and business performance collide for over three decades and knows that today, where most sectors are desperate for top level talent, organisations need to provide their staff with far more than just a job.

Hence the other pillar of the Group business – GENIUS Performance, which at its base level supports individuals with developing or staying on their A-game and organisations with a strong performance-driven culture.

They are practising what they preach, introducing an Academy to grow their own talent, which in turn allows staff to benefit from the same exposure to GENIUS as their clients. Schofield will continue to run GENIUS out of its Harley Street offices in London, supporting a pan-European client base, but leaves a recruitment business thriving.